Between the busy streets of Crouch End N8 and Muswell Hill N10 lies an area of open fields and woods that has long been enjoyed by generations of local people. You can follow its history here from from farmland to playing fields and listed conservation area:

c 1350 Playing Fields part of Rowledge Farm, the demesne or manorial farm of the bishops of London extending northwards from what is now Hornsey Lane towards Muswell Hill. Remains of ridge and furrow off Shepherd’s Hill (well captured in photos of c. 1900) confirm that the land was predominantly farmed as arable. By 1833 when it was leased by the Scrace Dickens family, it covered 294 acres.

1600–1800 Lax supervision by the bishops, however, meant that in reality Rowledge Farm had been subleased to several owners who converted the land into private estates (eg the Crouch Hall estate in Crouch End) or into a number of smaller farms such as Shepherds Cot Farm. These are increasingly turned over to grazing to provide London, which increasingly dominated the local economy from 1500, with meat and (particularly) hay.

c 1750–1800 The open fields with ridge-and-furrow strips are enclosed (though this could have happened earlier in the case of the irregularly shaped upper field and some of the smaller surrounding fields). Many of the boundary oaks planted in the new hedges at this period are still to be seen. The map attached to the Hornsey Enclosure Act of 1813 (which concerned the lands that had not yet been enclosed) shows the new fields, several of which survive to this day. 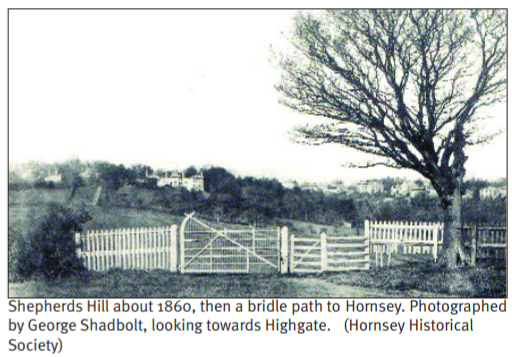 c 1860 Mr Lane, the tenant of [Finchley] Manor Farm – approximately on the site of Highgate and Hampstead golf courses – is also managing Shepherd’s Cot Farm and the Highgate Woods. He allows Londoners to enter the woods and fields in return for payment for a token or the purchase of milk. Eventually, and on similar terms, he informally allows sports clubs from Islington to play cricket on the fields.

1868 The Ecclesiastical Commissioners (founded 1836) succeed the bishops of London as lords of the manor. They manage the estates more energetically.

c 1880 Plans being drawn up for the systematic development of Hornsey and Finchley as prosperous suburbs, the development itself being delegated to large companies such as the Imperial Building Company who sub-contract the actual building to small building companies. The plans envisage the creation of grand roads, such as Bishop’s Avenue and the retention of the  Highgate Woods as open spaces in order to ensure higher rateable values for the surrounding land. Plans show roads being driven across the fields of Shepherd’s Cot Farm. Crouch End to be developed as a respectable middleclass Churchyard Bottom Wood (now Queen’s Wood) which are intended to open up the lower fields of Shepherds Cot Farm for development.

c 1885 The economic depression already evident in the agricultural and industrial spheres from the late 1870s, spreads to the building trade, with numerous builders going bankrupt. With no builders willing to take the risk of building houses northwards across the fields, Tivoli Road becomes effectively a culde-sac while Montenotte Road remains a road without houses until the 1920s. In face of the economic depression, the Ecclesiastical Commissioners are persuaded by the officers of the sports clubs to lease the fields to the individual sports clubs (some of which are relocated and consolidated within the area that is now Crouch End Playing Fields).

c 1893 In face of the continuing recession, the situation is regularised through the creation of Crouch End Playing Fields Ltd, whose chairman Ernest Hinscliffe Hindley (d.1940) is the son-in-law of the head of the Hornsey Local Board, HR William (whom Crouch End Clock Tower commemorates) and who had been instrumental in ‘saving’ Highgate Wood between 1882 and 1886. The shareholders are predominantly local people. The company is given a long lease on 69 acres of land and is allowed to manage the Crouch End Playing Fields. The company eventually serves as an umbrella group for 34 clubs.

1896-7 As part of the agreement under which Churchyard Bottom Wood was ‘saved’ through purchase by Hornsey, Queenswood Road is driven through the Wood, still with the ultimate intention that it would be continued across the fields to Park Road in Crouch End. Leases extended for a further 21 years. 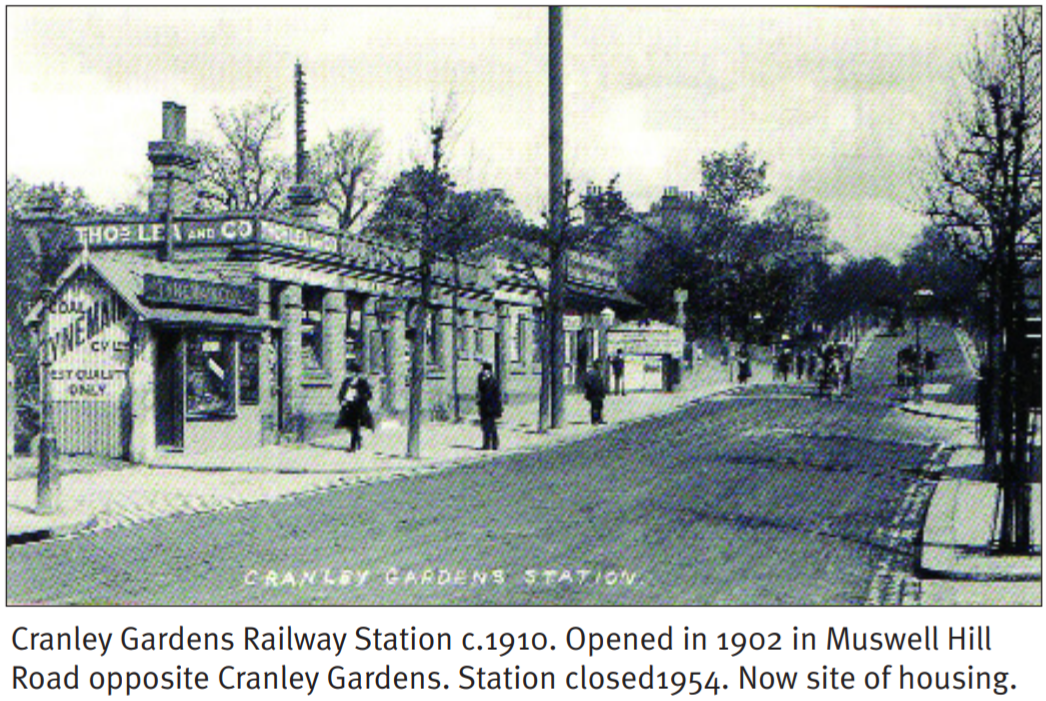 1910 After an extended period of negotiations, largely brokered by Hornsey Borough Council, the Ecclesiastical Commissioners are given planning permission to create Wood Vale skirting the Crouch End Playing Fields (1926) and subsequently to develop houses along it. In return Crouch End Playing Fields Ltd. Is allowed to purchase its grounds outright. The clubs collectively manage to raise the purchase price of £15,000 for most of the remaining land (37.5 acres) from individual members. The Ecclesiastical Commissioners continue (until the late 1950s) to own the houses lining the surrounding streets. Strict restrictive covenants are imposed to prevent Crouch End Playing Fields Ltd from developing the Fields for housing. Hornsey, as its share, acquires frontages along Shepherd’s Hill, ca. 20% of which is developed for housing while the remaining 80% becomes Shepherd’s Hill Gardens/Open Space and allotment gardens.

1961 Middlesex County Council purchases land owned by one club, Oakfield, at the heart of the Playing Fields and proceeds to build Bishopswood School (now Highgate Wood School) on the grounds. In the same years, electricity substations are built in the vicinity.

1973 Crouch End Playing Fields Ltd, by now largely owned by descendants of the original shareholders who no longer lived locally and had no interest in maintaining the open space, agree to sell the upper field to the Post Office for development. Crouch End Playing Fields Protection Society comes into being to fight against the proposal. The end result is that Haringey, the bigger individual clubs and a new organisation, the Shepherds Cot Trust (with financial backing from Haringey and the Sports Council) buy out Crouch End Playing Fields Ltd, which is eventually dissolved. In the process, Haringey acquires some of the ‘heartland’ of the fields, including the Upper Field, and hands them over to the Education Department.

1984 Fresh crisis as Haringey seeks to expand Highgate Wood School further into the Fields. Crouch End Playing Fields Protection Society revived as CREOS (Crouch End Open Space). The proposed development is modified (though the science block is still built), but the Playing Fields are officially scheduled as Metropolitan Open Land and the Haringey owned land is transferred to the Parks Department and is managed by CREOS.

Become a member of CREOS (Crouch End Open Space). It is only £10 annually (£15 for a whole family). Your subscription will make a real difference and enable CREOS to maintain, improve and protect the unique character of this area for us all to enjoy.

CREOS is a conservation charity (reg. charity no. 296860)
We are here to protect, maintain and improve the CREOS area.